Whatever the size of your company, one of the most important security measure to deploy to block threat actors from gaining access to your servers, workstations, and data is a hardware firewall. A hardware firewall will make sure your digital assets are well secured, but how should your firewall be set up for optimal network security? If you follow network segmentation best practices and implement firewall security zones, you can improve security and keep your internal network isolated and protected from attacks by remote hackers.

Most companies have a well-defined network structure that incorporates a secure internal network zone and an external untrusted network zone, often with intermediate security zones. Security zones are sets of servers and systems that have similar security requirements and include a Layer3 network subnet to which several hosts link up to.

The firewall provides protection by managing traffic to and from those hosts and security zones, whether at the IP, port, or application level.

There is no single configuration that will be ideal for all companies and all networks, since each business will have its own requirements and required functionalities. However, there are some network segmentation best practices that should be implemented. 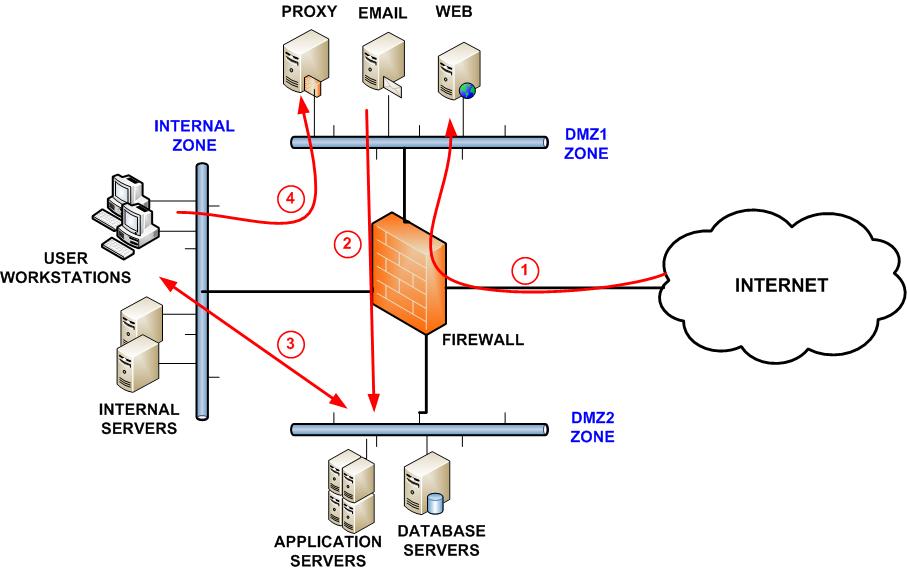 In the above depiction we have used firewall security zone segmentation to keep servers separated. In our example, we have used a a sole firewall and two DMZ (demilitarized) zones and an internal zone. A DMZ zone is an isolated Layer3 subnet.

A web server may to link up with a database server, and while it may seem like a good idea to have both of these virtual servers operating on the same machine, from a security perspective this should be avoided. Ideally, both should be separated and located in different DMZs. The same applies to front end web servers and web application servers which should similarly be located in different DMZs. Traffic between DMZ1 and DMZ2 will no doubt be required, but it should only be permitted on certain ports. DMZ2 can connect to the internal zone for certain special cases such as backups or authentication through active directory.

By complying with network segmentation best practices and using the above firewall security zone segmentation you should be able to improve the security of your network. For greater security, we also recommend using a cloud-based web filtering solution such as WebTitan, which filters the Internet and stops end users from accessing websites known to host malware or those that break acceptable usage policies.